Zombies: A Record Of The Year Of Infection by Don Roff, Illustrated by Chris Lane 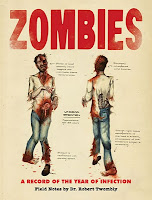 Zombies: A Record Of The Year Of Infection is presented as the illustrated journal of Dr. Robert Twombly, discovered in the aftermath of a worldwide zombie infection. To say that this book breaks ground in the massive amounts of other zombie appearances in horror fiction would be stretching a bit, but based on the strength of the story's simplicity and the impressive art direction, I can say that it definitely deserves to be noticed.
This illustrated journal was discovered in the aftermath of the worldwide necrotic infection that began on or around January 7, 2012 and lasted for approximately one year, killing more than 5 billion people.
The journal is a unique record of the time of infection in that its author sought to understand the undead by living among them. It is also the record of the author's day-to-day experiences at a time when such records were not commonly kept.
The manuscript was found inside an empty cottage at the edge of Hudson Bay in northern Canada. The fat and the whereabouts of the author remain unknown.
The contents of the journal are reproduced uncensored and in their entirety.
Now, when I say that there is a simplicity to this book, I actually mean it. The way the story unfolds is very cut and dry. Scientist finds himself in zombie apocalypse, studies the various stages and physical effects of the infected, attempts to escape worldwide catastrophe, writes it all down. Like I said...very cut and dry.
Which is refreshing.
The difference between this and other zombie novels/illustrated guides/fiction, is that this one doesn't make any bones about it's lack of complexity and straightforward storytelling. The author obviously sought to make the reader believe that they were actually reading the work of a scientist - someone not very concerned with flair and over-the-top storytelling - and therefore left out any over dramatizing; and in some instances - completed sentences and/or finished thoughts. In fact, I was a little put off by this at the beginning, but the overall effect is actually quite chilling if one suspends disbelief. Roff really pulls this off very well.
The art in this volume is stunning. Chris Lane pulled out all the stops in order to create a visual starkness that blends beautifully with the narrative. Lane's use of what looks to be ink and watercolor is both desperate and startling, showcasing a preference towards heavy black lines and vicious red washing than anything else. An approach that I absolutely love.
Me, I'm not tired of this whole zombie revolution and it's massive amount of copycat and mob mentality fiction. But it's incredibly refreshing to see something that doesn't even bother to try to contend with all of that. There are no morals to this story, there are no pretty 'and-the-hero-saves-the-day' moments, and there are no apologies for being exactly what this book is: a straight forward account of the zombie onslaught.
You can grab it at Amazon and other online retailers. Surprisingly, there's also a wikipedia article about it. Check that out here. You can visit Don Roff at his official website and follow him on Twitter here. You can check out Chris Lane at his website.