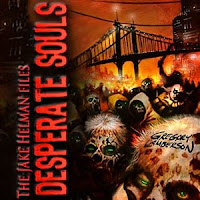 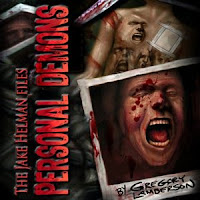 I wouldn't normally release a bit of news via this website, but I received an email about a day ago with some really exciting information.

My favorite horror/crime series of books was just released in Audio book format by Audible.com!

That's right! You can now pick up Greg Lamberson's Personal Demons and Desperate Souls, both from the Jake Helman Files series, in Audio Book format for your listening pleasure.

Here's the release I received:

The Jake Helman Files tells the story of ex-cop turned occult detective Helman, who finds himself embroiled in the supernatural at every turn. In the first book, PERSONAL DEMONS, Helman tangles with a serial killer who steals the souls of his victims, a reclusive billionaire, and the Biblical Cain and Abel. In DESPERATE SOULS, his foe is a voodoo priestess who uses a drug called Black Magic to create an army of zombies in New York City. Print and e-book editions of the novels are available from Medallion Press; PERSONAL DEMONS won the IPPY Gold Medal for Horror in 2010.

“I love crime drama and noir as much as I do horror,” says Lamberson, director of the cult horror film SLIME CITY and its new sequel, SLIME CITY MASSACRE, “and I love combining these genres. Jake Helman is as informed by THE MALTESE FALCON and the TV series WISEGUY as he is by the creations of Clive Barker and Stephen King. Action is the unifying thread, but the action Jake finds himself in tends to be a lot bloodier than that faced by other hardboiled heroes. Surprise is the real key.”

Lamberson is pleased to see his character debuting in other media. “The first book, PERSONAL DEMONS, was based on an unproduced screenplay I wrote back in the late 1980s, after I made SLIME CITY. I knew the script was too ambitious to do on the budgets I make movies on, so it went into a drawer until around 2000. After 9/11, I developed it as a novel, which took a few years. When it was published by a small press in 2004, I started fantasizing about the sequels. Before I knew it, I had a fairly intricate arc mapped out for the first six books. I love the idea of the audio books because they remind me of the old radio serials, and they still leave a lot to the imagination. I’d love to see Jake fighting for his life in comics, and of course in movies.”

The author has already completed two more novels in the series for Medallion: COSMIC FORCES, which will be published this October, and TORTURED SPIRITS, due in 2012. “I told Adam Mock, the president of Medallion Media Group, that I want to do at least 10 of these Jake Helman books. In truth, I’d like to write a lot more than that, as I’m a real fan of pulp novels and continuing characters. But I plan to write at least six, which will complete the story I set out to write. Jake suffers a lot more than most other heroes who battle the supernatural. I love subjecting him to physical and emotional torture, and as long as he can take what I dish out, we’ll keep going.”


Lamberson previously wrote JOHNNY GRUESOME, winner of the IPPY Gold Medal for Horror in 2009, and the critically acclaimed werewolf novel THE FRENZY WAY. SLIME CITY MASSACRE will be released by Media Blasters sometime this year.

Now, I don't know about you, but I'm hopping on this chance. For the Lamberson fan - and completist - you're not going to want to go without it.

For more information, check out the following links: